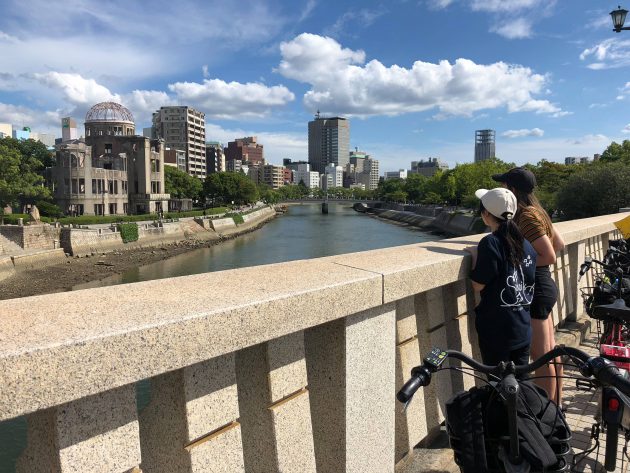 This is a guided cycling tour in which participants ride an electric bicycle and learn about the reconstruction of Hiroshima's bombed heritage sites and how we are trying to protect peace in the city of Hiroshima. This tour is led by our friendly team from Hiroshima.

10:00-10:05 Meet up at the rest house of Hiroshima Peace Memorial Park.
Start of with greetings, introduction, explaination of the route, and corona prevention procedures (tempurate checks, etc.).

You will learn more about some lesser known heritage sites, such as the Guardian Dog statue and the Gokoku Shrine gate, which withstood the atomic bomb.

10:40-11:00 Hiroshima Central Park
Walk through a vast green park to enjoy the beautiful nature that Hiroshima has to offer.

11:00-11:10 Aioi Bridge
Next you will visit the bridge that was the target of the bomb. Both the river and the bridge have remained since that time. You will witness the continuation of history.

11:25-11:40 Motoyasu River and the Peace Bridge
When heading south towards the suburbs from the Atomic Bomb Dome and Peace Park, you will see the gorgeous riverside nature. Your guide will explain the meaning and memories that are embedded in the Peace Park.

11:40-12:00 Higashisenda Park
Located 1km from the center of the blast is a park filled with trees sent from countries all around the world. You will hear the stories related to this site.

12:20-12:30 Hiroshima Railway
Located 2km-2.5km from the center of the blast is the Hiroshima Railway. Did you know that there are two trains that survived that blast and still used today? They started running again only three days after the explosion.

12:30-12:40 Miyuki Bridge and Kobayashi River
Right where the bomb's reach ended, there is a picture on display. This significant picuture shows the relatity of the difference between now and then.

12:40-12:50 Suriving Weeping Willow Tree
This is the highlight of the tour. This tree continued to grow despite the rumors that there would be natural growth for at least 70 years. This tree represents the strength, determination, and hope of the people of Hiroshima.

12:50-13:00 Peace Boulevard
On the way back to the Peace Park, we will pass by various monuments and trees that are significant to Hiroshima's history. At the same time, you will also wintess the current thriving city.

13:00 Hiroshima Peace Memorial Park
Once we arrive back at the park, your trip will come to an end.

In Hiroshima City, there are many heritage sites in the suburbs in addition to the Peace Memorial Park, each with a story connected to the atomic bombing. While at the heritage site of the bombing, we will introduce you to the power of the atomic bomb and the situation at the time. 70 years after the war, the destroyed Hiroshima has been dramatically revitalized, and now you can see it full of greenery. You can get a real sense of it through your own eyes, and cycling is the best way to do that.

With the guidance of our local staff, who grew up in the city, come and experience the real Hiroshima that you can't experience through photos and books.

*You will be given data of the photos taken on the day.

*If you wish, we can also guide you to the Atomic Bomb Museum.
(Additional hour, plus 1,000 yen cash payment on the day. Not
possible when combined with other guests, only from 10:00 to 13:00)
*The timetable may change depending on the situation on the day.

Hiroshima was the first city to be hit by an atomic bomb in the world. It was a tragic event in history. Initially, the A-Bomb Dome became the focus of controversy regarding whether to preserve or destroy it, as the ruins may elicit horrible memories for the survivors. However, it was decided that the Dome would be preserved and convey the tragic atomic bombing experience as a symbol of peace. It was designated as a UNESCO World Heritage site in 1996.

The atomic bomb was dropped on Hiroshima on August  6, 1945, and the city suffered a lot of damage which remains in the history of war. But just three days later, despite the bomb hitting nearby trains and railroads, the city train started moving again in cooperation with the people of Hiroshima. The streetcar is still the same as then and is still running in the city. The trains that people in the town have reconstructed with all of their strength are still watching over the people in the town with a warm gaze.